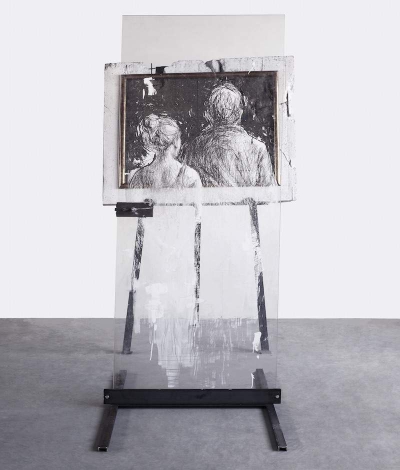 Gonzalo Borondo is proof that value doesn’t necessarily accrue with age: he’s been making his mark for quite a few years now; his unique style features enigmatic figures executed with exceptional energy.

As a teen, he first entered the public arena with graffiti on train cars.

He went on to study fine arts in Madrid and Rome, familiarizing himself with more academic painting techniques. Francisco de Goya, portraitist and painter of the fragile and terrible human condition, remains one of his key influences and role models.

Borondo seeks to guard the force and emotion in his work, carefully avoiding anything excessively polished or perfect. “Despite” his impressive pictorial technique, he preserves the spontaneity and the improvisation that are the core of his expression.

He has not hesitated to inject new energy into his art through the technique of glass etching, confirming his inventiveness and his ability to constantly seek innovative visual effects and experiments.

After one too many sanctions from the Spanish administration, he now resides in London, enjoying great freedom in Hackney, which is lucky to count him as one of its denizens.

Borondo, like a migrating bird, flies from country to continent in pursuit of frescoes, projects and motivating places.

He has just published his first monograph, Memento Mori, an unvarnished, no reins book, an open house to his studio and his precious, often novel inspiration sources.

From behind,
to draw our gaze toward the same point,
immolated in a classic frame,
pencilled with energy.