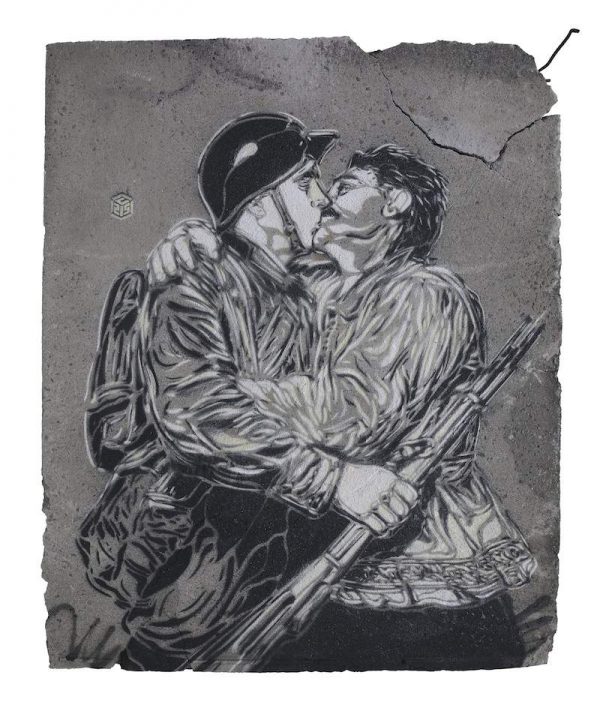 The end of a relationship and a separation from his child pushed him to cover the walls of the route to school with portraits of her. Shimmering, warm images, like bouquets of flowers and thoughts for his daughter Nina.

Strongly aware of social issues, he pays tribute to the homeless, to the undocumented, to all those the world has left by the wayside. There is no sordidness or pity in his extraordinarily fine stencils, with their warm and comforting polychromies.

Today, C215 has a confirmed international reputation, but remains extremely active and involved in his home city of Vitry-sur-Seine, to which he has invited numerous urban artists to contribute their work, making it the street art capital of France.

Although he does not consider himself a “political” artist, at the close of 2014 he mounted two shows in Paris that featured strong consonance with the nation’s current events: “Libertés. Egalités. Fraternités.” (“Liberties. Equalities. Brotherhoods.”) and “Douce France” (“Sweet France”).

In the same vein, he has paid tribute to French scientific genius with a show at the Musée des Arts et Métiers titled “E=mc215. Dialogues entre sciences et art” (“E=mc215: Dialogues Between the Arts and Sciences”).

Liberated kiss…
Stolen from history,
when black and white print themselves
on the vellum of a fragment of hope.