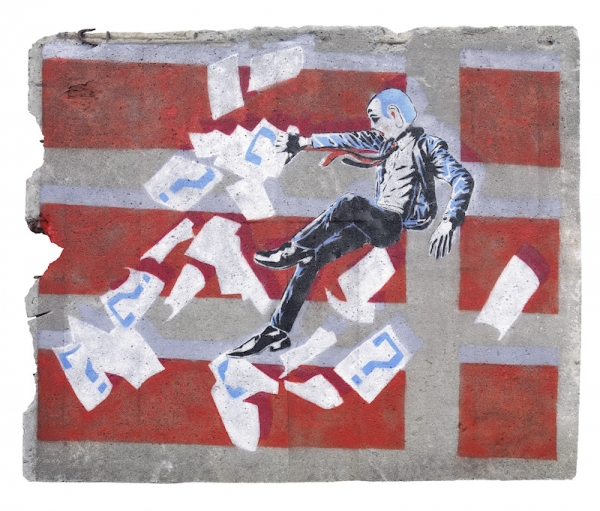 FIRE began working in the street with the ZoomZoo collective and its stickers in 2004, and then in collaborative stencil technique using the throw-up FIRExRD.

FIRE and RD were distressed to see China, their home country, like so many others, pitching itself head-on into a race for unbridled economic development and forgetful of its cultural roots. For several years, they produced forgotten symbols, feeling that their city, cut away from its roots, was losing its soul.

In June 2013, he began “Missing,” a long-term project inspired by Beckett’s Waiting For Godot: “What are we doing here, that is the question. And we are blessed in this, that we happen to know the answer. Yes, in this immense confusion one thing alone is clear. We are waiting for Godot to come.”

A stencilled figure with an exaggerated, theatrical face, in a suit and tie. In his hand, a cardboard cone and a bouquet of flowers. He is waiting, hoping, consulting his watch… time passes… the flowers wilt… life goes on...

FIRE’s work on a section of the Berlin Wall: a falling man clinging to a giant question mark. The mark of the doubts and questions we can and must raise when faced with an unacceptable situation.

He did not fall from the administrative building.
He simply dropped,
onto a carpet of extinguished stars,
asking himself a multitude of questions.