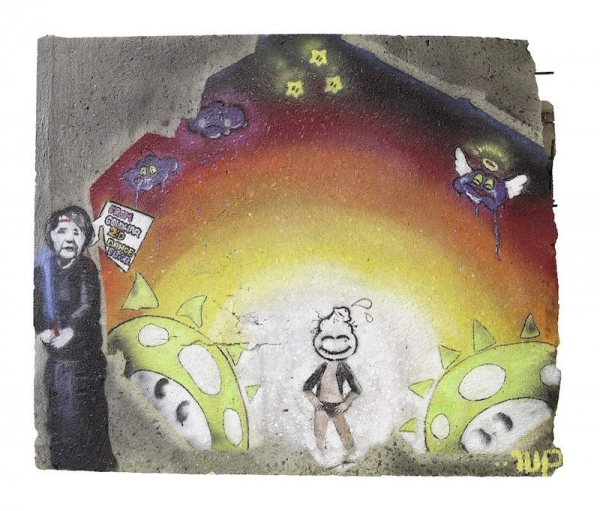 The 1UP crew counts some fifteen members, both men and women, all from Kreuzberg, a neighbourhood of working class traditions and a hotbed for alternative movements. More than just a crew, it is a family, where “strength in unity” is the rule: One Crew, One Love, One Power.

Extra-large lettering for a single tag. No question of individuality, of taking more than your fair share.

Inspired by the “action painting” of the Spanish crew Bajo Tierra, 1UP has taken up its modus operandi.
In a moving train, one of the crewmembers pulls the alarm at a predetermined location. Accomplices hidden along the train lines run up to the stopped train, brandishing spray cans, paint guns, and their famous extra-large paint rollers. The makeover takes three minutes, and is filmed by another member of the crew. Their actions have been collected in a self-portrait on DVD, now a collector’s item.

1UP loves its city and considers its actions – in trains, tunnels, subways, vehicles, roofs – as declarations of their love. The efficacy of their commando operations is revered by graffiti artists the world over.

In the cavern of hope,
we go dancing each night.
On the other side of the wall,
the killjoys rant on, rant on….