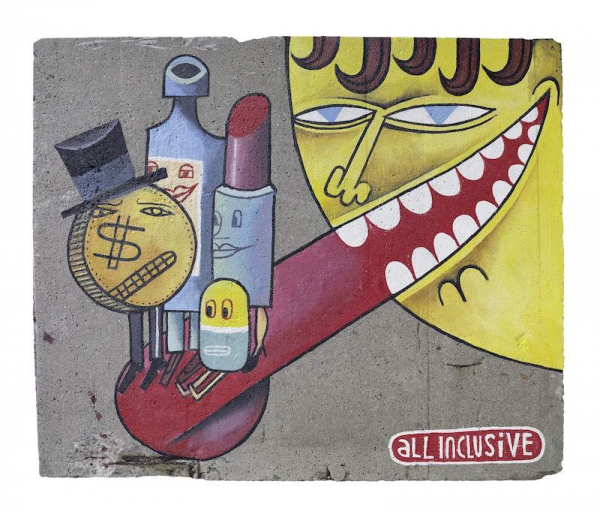 An extravagant, indefinable personality with a shifting, evolving biography, Jim Avignon, whose real name is… well, that’s of little importance – his preference is for imaginary identities.

An accidental painter and a fan of comics and cartoons, he defines himself as the “fastest painter in the world.”
This intense yearly output of hundreds of canvasses has enabled widespread distribution of his art, all with sustained improvisation and spontaneity. His exhibits can be mounted on site within just hours of the opening.

He is one of the hundred-odd artists who contributed in 1990 to the East Side Gallery, an open-air art space carved from the remains of the Berlin Wall.

In 1992, he gave an extraordinary performance at Documenta, in Kassell, leaving a lasting impression as, every day, he painted an enormous canvas, then tore and shredded it by breaking it across his body.

A member of the one-man-entertainer band Neoangin, he performs live, produces albums, and sets the scene in dance clubs, where he is considered to be the Titian of techno.

Really, his philosophy can be summed up in a single sentence: “When you’ve got something to say, you have to open your mouth…”

To make a fragment of wall
into the headline of a “comic” journal,
to make a mockery
of our candy-guzzling world