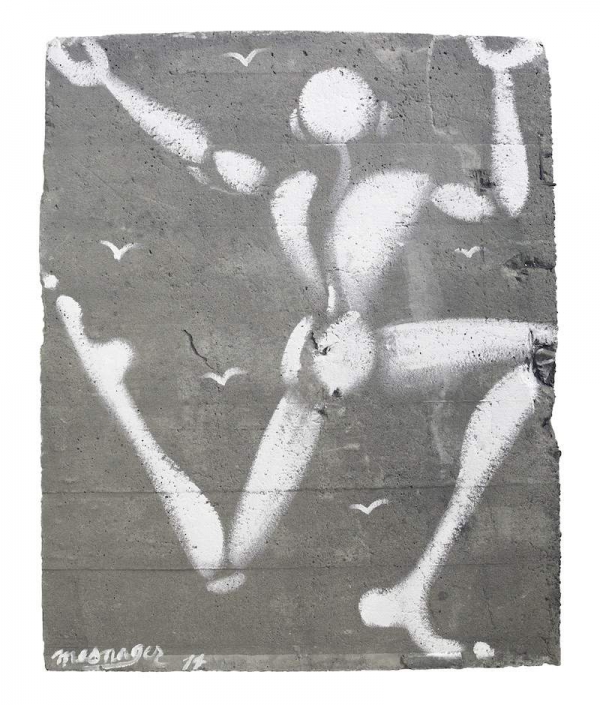 As a ten-year-old in Paris, with his neighbour Jean-Pierre Le Boul’ch, who ran an art and poetry review, he crossed paths with the era’s greatest artists, including César, Armand, Ernest Pignon-Ernest, and many more.

After attending the Ecole supérieure d’arts appliqués in Boulle, and marked by the death of pop artist Robert Malaval in 1980, Jérome Mesnager decided to paint swiftness and life.

In daylong ephemeral art events held in abandoned spaces, using a paintbrush and a pot of white paint, he covered his body, transforming it into an “ideal body” that moved through a space transformed into an artistic composition.

On 16 January 1983, at approximately 12:30 pm, “l’homme blanc” (the white man) appeared on the walls of abandoned houses, in the hopes of reducing the desolation in “expulsed” neighbourhoods…

This “character,” a symbol of freedom, joy, and universality, quickly stepped off the walls of the city of Paris to spread its message of fraternity to the four corners of the earth, from Asia to the Egyptian pyramids.
Several thousand have now joined the dance.

L’homme blanc – is he a contemporary version of Auguste Bartholdi’s Statue of Liberty? After all, both artists hail from France’s Haut-Rhin!

White man,
a puppet of the present moment,
pitiless mirror
of our urban gesticulations.