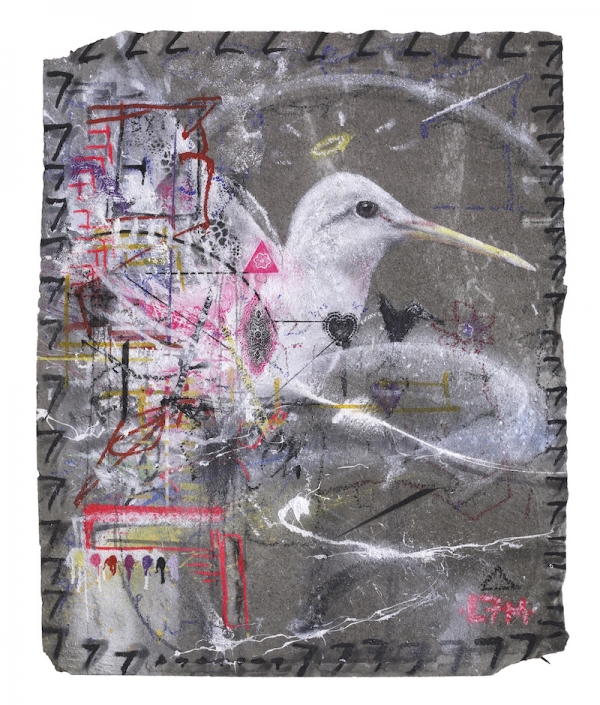 Luis Gustavo Martins was born drawing. He began participating in drawing competitions as a young child; one of his first prizes was an illustrated book about animals. A passion that would never leave him.
At sixteen, his cousins introduced him to pichação, a graffiti style originating in São Paulo in which risk-taking, transgression, and statement overtake aesthetics.

His discovery of spray paint opened up new perspectives which he quickly put to work urbex-style on seedy facades and abandoned buildings, like a last survivor leaving a message for future generations.

In the face of growing environmental threats, which are felt with particular acuteness in Brazil, a first-hand witness to the destruction of the Amazonian rainforest, and in reaction to the passiveness of a population numbed by the media, the work of L7M (seven is his lucky number) has two focuses.

He paints tropical birds in motion, positive and luminous, in bright colours, combining them with “graffuturist” geometrical patterns. Animals free and wild, bearers of hope.
His human portraits are dark, blind, and silent, alienated by the mass media and multinational corporations. For L7M, urban art is a vector for raising awareness, and, who knows, for protest and rebellion…

The colour birds are bearers of hope,
they dislike deforestation,
and chemicals;
all they want
is to keep the earth from which they leap to infinity.