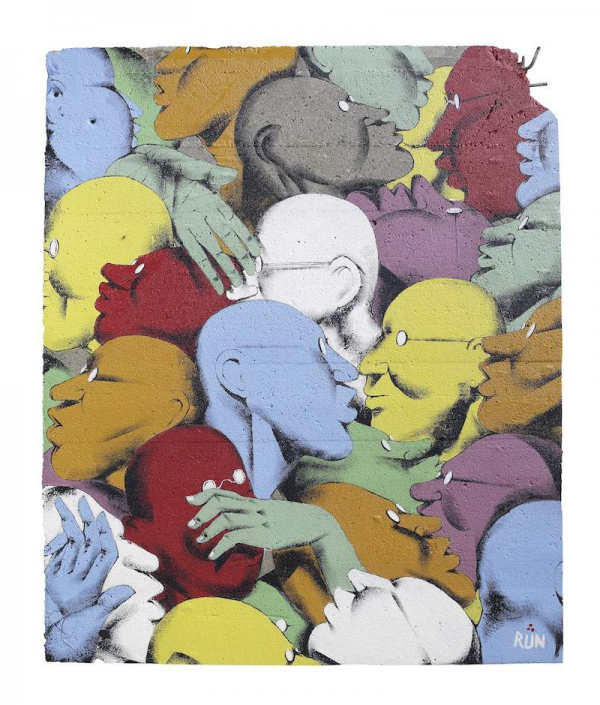 Giacomo Bufarini, an Italian artist living in London, celebrated an excellent end to the year 2014 with the birth of his son Django and his first personal show, titled, “The Parable of G,” an introspective artistic stroll at the Howard Griffin Gallery in London.

The name RUN was inspired by the sound of the word itself, but also the meaning which gave great importance to the artist who focused his first year working on dynamism and movements. We can also say that the action taken in his work make the word RUN significant.

A prolific artist, his creations appear to have roots in the Italian Renaissance and the Venetian School – no surprise for this Marco Polo of the art world.

A world traveller who thirsts after new discoveries, always avid to meet new people and hold new conversations, Run’s work is enriched by the cultures, myths, and symbols of the countries and continents he has crossed, from China to Senegal via India.

Wherever he goes, he offers murals to the local population, more or less permanent displays of his talent as a muralist, an activity he took up in 2003 while squatting in a building in Italy.

He has pursued his “live performances” all over the world, from Gdansk in Poland to Shenzhen in China; as well, of course, as in London; and is an enthusiastic and affectionate contributor to major urban street art festivals.

Mixing species,
mixing souls,
the need to change, to complete each other.
Hello…how’s it going?