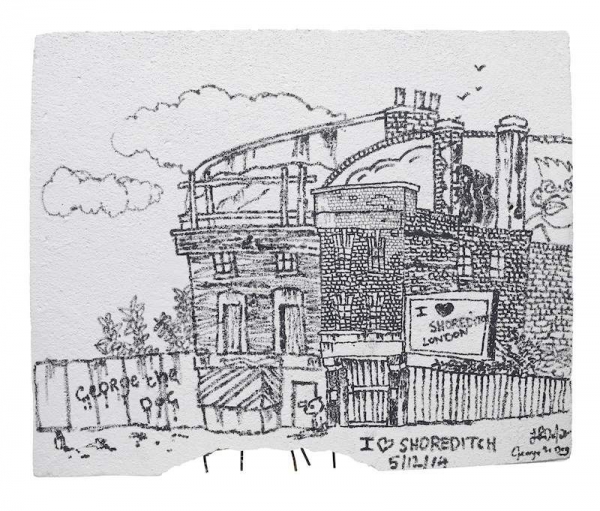 This is an art world fairy tale.

At the age of ten, Dolan learned that his parents were actually his grandparents, and that he was the son of one of his sisters, who was actually his mother.

Traumatized, he ended up in a vicious cycle of escapes from home, drug addiction, and prison, and spent twenty long years living on the street…

In 2009, he was offered a dog. George the Dog, who would become his constant and crucial companion. From that day forward, he could no longer risk arrest, for smoking or for anything else… Dolan was responsible for George, and he took that very seriously.

On his sidewalk in Shoreditch in East London, with George guarding the collection hat, he drew constantly, out of pure passion: pictures of his associate, of the surrounding cityscape.

Richard Howard-Griffin, the owner of Howard Griffin Gallery noticed his drawings and offered him a show. Intrigued by the project, some fifty renowned street artist contributed to Dolan's drawn cityscapes.

In 2013, a show titled “George the Dog, John the Artist” was mounted and all the works of art in the show were sold generating tens of thousands of pounds for the artist. John Dolan's incredible life story was published around the world to international acclaim in 2014.

George the dog accompanies John,
from the street where he lived,
to the road he painted…
And the dog pisses at the artwork’s base
Who knows why?