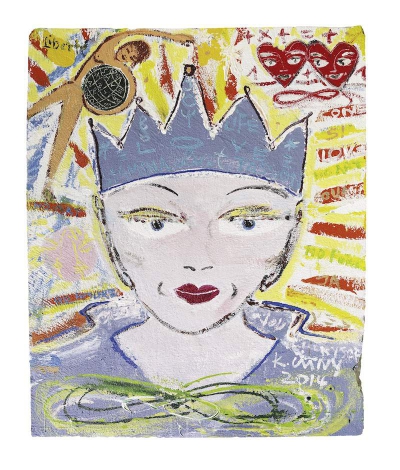 Berlin in the 1980s was a city where all artistic callings found an outlet.

Kiddy Citny, a true “child of the city,” created monumental frescoes on the Berlin Wall, the wall of shame. Symbolic “Heart-Shaped Faces,” his kings and queens dreaming of reunification, love, freedom; his “World in Your Arms,” hope for the reuniting of families torn apart by force.

In parallel, he founded Sprung aus den Wolken, a minimalist punk band, whose repertoire included a prescient song called “The Wall Will Fall.” He continues to perform, including a show in Strasbourg in 2014 for an exhibit honouring the 25th anniversary of the wall’s destruction.

Kiddy has not limited himself to urban art and music: he is also a performance artist, painter, designer, poster artist, and stylist. His works give rise to diverse productions, all accessible to the broader public, in keeping with his motto: “It’s all for you.”

Concert tours, shows, and performances all draw him temporarily away from Berlin, his centre of gravity, where he has resided for the past few years.

The child-king, above Berlin,
requests our silence.
He wants us to listen to the singing
of the colours on the tattooed walls.