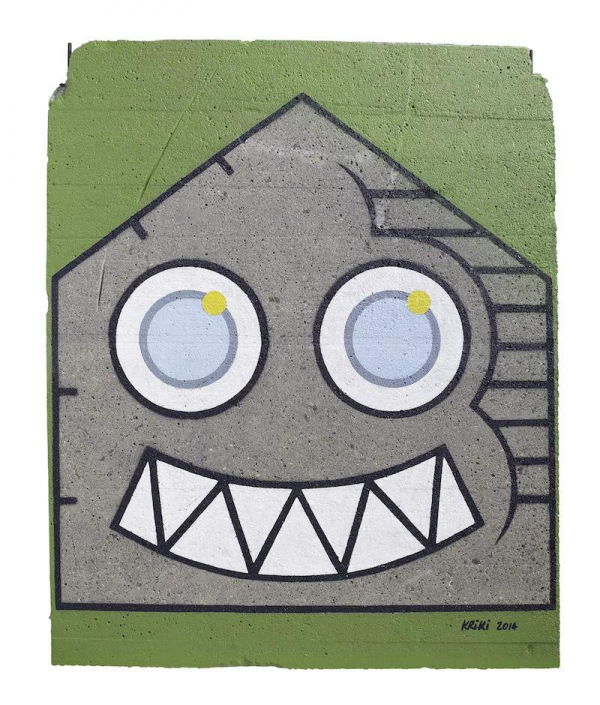 Born in Issy-les-Moulineaux (France) in 1965

Kriki promotes his electro-punk band Les Envahisseurs, in which he is the guitarist, with graffiti throughout Paris; the streets were his training for entry into the world of urban art.

In 1984, he founded the sculpture group Nuklé-Art, and covered the walls and fences of Paris with the famous stencil “Allô Olga, y’a un pochoir à effacer” (“Hello, Olga, you’ve got a stencil to erase” – Olga was in charge of scrubbing away graffiti for the City of Paris Sanitation Department).
Immersed in alternative culture, in 1985 Kriki contributed to a two kilometre-long mural project to revitalize the crumbling industrial lots lining the Canal de l’Ourcq.

In 1986, he joined forces with the publisher Editions Parallèles to participate in Pochoir à la Une, which became a vital reference work for the pioneers of stencil and street art.

Kriki describes his entry into the art world as a “break-in” and was just twenty-three when his first solo show was hung at FIAC (Paris). He emerged as one of the major young painters in the French art scene, with links to the Figuration libre movement, which he helped inject with new momentum.
Kriki’s visual world is a skilled combination of references – Baroque, neoclassical, African costume, architecture and more, blended with contemporary bionic and technological elements. Kriki’s painting is all about hyper-connectivity.

Since 1985, Le Fuzz, a reference to the album Psychedelic jungle by the punk rock band The Cramps, has been a central figure in his work, a recurring hallmark. Half-robot, half good-luck charm, a polymorphic figure with head shaped like a house, Le Fuzz is a virus contaminating art history.
In 2013, Kriki installed “Katielo,” a monumental sculpture at the Collégiale Saint-André de Chartres. Inspired by a Malian divinity, Katielo is a Madame Pompadour with the head of a deer, crowned by flowers, trainers on her feet, seated on a stage amplifier. The work is a perfect summation of Kriki’s ambition to incarnate and perpetuate punk culture.

A tutelary figure in urban art, Kriki shows regularly in galleries and contemporary art fairs. His works hang in prestigious institutional and private collections. Numerous works have been devoted to him.

If you encounter Le Fuzz
in the asphalt temple,
watch out!
This creature may change your life.