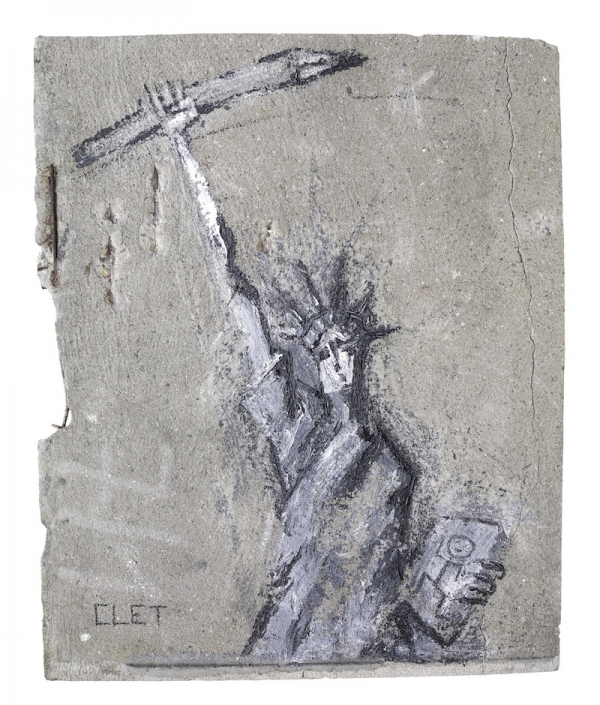 With a degree in fine arts in hand, Clet left Rennes for Rome, where he worked restoring antique furniture before settling in Florence in 2005.

It was a shock: Florence, the Renaissance city, with its prestigious artistic heritage, a work of art in itself, was disfigured by street signs – injunctive ones, at that! His talents as a painter and his sense of irony began to take shape outside the studio.
He drew scenes, printed them on stickers, generally in black, and then stuck them to the signs, careful to ensure that they remained readable.

Clet dislikes one-way streets.
One of his key pieces is a crucifixion on a “dead-end” sign. Religious scene, the nonsensical nature of religion, eternal life… many interpretations are possible.

Clet is an artist with no limits.
The white slash across the red no-entry sign has provided him with a varied and imaginative creative space, resulting in cosmopolitan and now iconic signage.
Institutional solicitations now pour in from municipalities requesting Clet’s work to lighten up their street signs.

As a painter and a sculptor, Clet defies norms.
In 2012, Florence acquired a temporary nasal appendage (“Prendiamoci per il naso”) on the San Niccolò Tower, giving it a human face. And until September 2014, on one of the overhangs of the Ponte alle Grazie, “L’uomo comune" (“The Common Man”) extended a foot into space… an invitation to adventure.

7 January 2015:
freedom flew out of an armed pencil.
Forgetting the flattened canvas,
Delacroix has created a following.