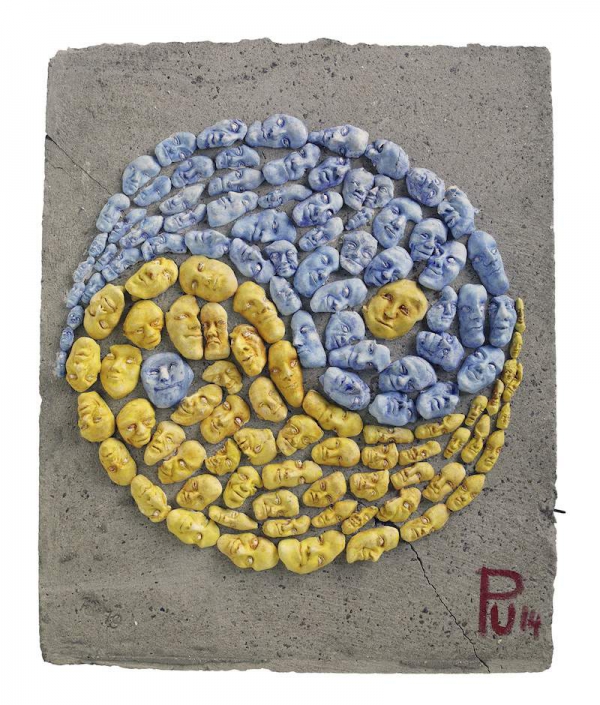 Sculptor Peter Unsicker has a ground-floor studio with a window overlooking the street, the concrete horizon, an unobstructed view of the Wall.

He began his “work on what is corrupted” in 1986, for “How can a body find itself in stone – in concrete? The distance is too great, its chance is just inside.”

A huge preventive bandage, themed “The Season of Mould,” torn off during a military patrol… “This was war in front of his door!”

The work continued and proliferated across the wall throughout successive “cleanings” with plaster masks of grimacing faces, a kind of intriguing and questioning memorial.

The struggle continued, “wood against concrete.” Imagining that contagious rot could be passed from one to the other, Peter Unsicker leaned pine beams against the wall. His studio came to be known as the “Wall Street Gallery.”

In 1989, he covered the wall in shards of mirror, “Fissure in perspective,” in an ephemeral Mu(seh)um (seh = see). At its base, bones and skeletons were deposited, presaging resurrection. Perfomance: "Transplantation" - east-Mark in west-Mark in bone-Mark (marrow).

On 9 November 1989, the Berlin Bear danced again, and the (W)all Street Gallery continued its sculptural and musical activities…

X-ray of a Yin-Yang brain,
accumulation of masks,
memorial of the absurd:
faces call to each other from either side of the wall.